History and Legend of the Camino de Santiago

History: Pilgrims have been travelling to Santiago de Compostela on foot or on horseback (and more recently by bicycle) for over a thousand years. Godescalc, Bishop of Le Puy, France, went to Santiago in 951 AD and was one of the first pilgrims to make the journey. At the height of the pilgrimage’s popularity in the 11th and 12th centuries over half a million people are said to have made the pilgrimage from different parts of Europe each year, the majority of them came from France.

Pilgrimages had been popular with Christians ever since Constantine the Great had the Church of the Holy Sepulcher built over the site of Christ’s burial in Jerusalem in 326 AD, and the discovery, shortly afterwards of the Holy Cross itself. Those journeying to this shrine were known as palmeros (palmers). Romeros went to Rome, the burial-place of Saint Peter and the great center of Christian pilgrimage during the Middle Ages. The third pilgrimage route to Santiago de Compostela was established after the finding of the remains of Saint James the Great (son of Zebedee, brother of John, Christ’s cousin and one of the twelve apostles) during the early part of the 9th century.

The high point of the Camino de Santiago de Compostela occurred between the years 1000 and 1500. Although numbers dwindled after that due to the Reformation and other political factors, the stream of pilgrims trudging westwards from different parts of Europe to the far reaches of Galicia in northwest Spain never completely dried up. Since the late 20th century the Camino has been experiencing somewhat of a resurgence.

Legend: After the death of Christ, the disciples dispersed to different parts of the then known world to spread the Gospel as they had been bidden. Little is known about the life of St. James, but after Christ’s death, he went to Spain where he spent a couple of years evangelizing. He returned to Jerusalem but was beheaded by Herod shortly after his return in 44 AD.

Immediately following his martyrdom, his followers are said to have taken his body to Jaffa, on the coast, where a ship was miraculously waiting for them and they set off back to Spain. They landed in Iria Flavia on the coast of Galicia, present day Padrón, some 20 kms from what is now Santiago de Compostela. The journey from Jaffa to Iria Flavia, in a stone boat, has been purported to have taken only a week thereby providing proof of angelic assistance.

St. James’ body was buried in a tomb on a hillside, along with two of his disciples and forgotten for the next 750 years.

Early in the 9th century a hermit living nearby had a vision (which he subsequently reported to the bishop of Iria Flavia) of a very large bright star, surrounded by a ring of smaller stars shining over a deserted spot in the hills. This matter was investigated and a tomb containing three bodies was found, immediately identified as those of St. James and two of his followers.

When the King of Asturias, Alfonso II, visited the site, he declared St. James the Patron Saint of Spain. Alfonso had a church and a small monastery built over the tomb in the Saint’s honor, around which the town of Santiago sprung up. It was known as Santiago (for St. James) campus de la stella or campus stellae, later shortened to Compostela.

Another explanation of the word Compostela is that it is derived from the Latin componere (to bury), as a Roman cemetery or early Christian necropolis is known to have existed under the present day cathedral in Santiago – where the remains of St. James are still believed to be housed today.

The Pilgrimage: News of the discovery spread and soon the Camino de Santiago de Compostela was established as the third great pilgrimage route in Europe.

Santiago de Compostela was attractive as a pilgrimage route because it fulfilled the various criteria necessary to make a pilgrimage worthy of merit. It was far and difficult to reach, thus requiring a good deal of hardship and endurance to arrive there. It was sufficiently dangerous – there were wolves, bandits, fever, rivers that were difficult to cross, unscrupulous ferrymen – as well as being in Spain, then locked tight in a struggle with the Moors.

The road itself, both through France and in Spain, was also well supplied with shrines, relics and other sights worth seeing. As pilgrim numbers increased, roads, bridges and hospices were built. The pilgrimage churches were characterized by their ambulatories round the inside of the building to facilitate viewing of the relics exposed behind the high altar.

Many churches in Spain are dedicated to St. James, many of which contain his statue, whether as Apostle or Pilgrim or as Matamoros (the Moor slayer). 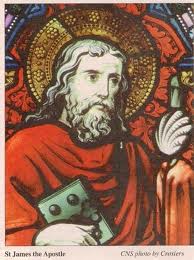 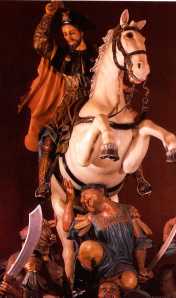 9 responses to “History and Legend of the Camino de Santiago”